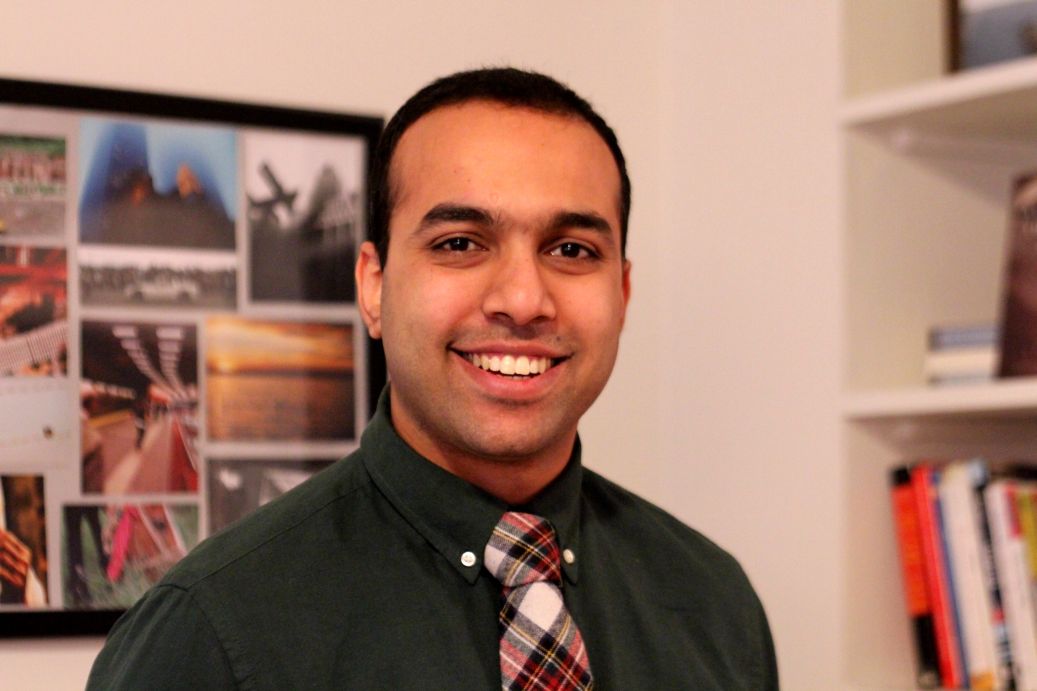 A few weeks ago, I read an interesting article in the New York Times about the use of Google Search by physicians to learn about their patient’s backgrounds prior to consulting on them. The author was Haider Warraich, an internal medicine resident at Beth Israel Deaconess Medical Center in Boston. I did what anyone would do, I googled him. I was very pleasantly surprised when a list of his publications popped up and I realized that I had read his articles in the past but never paid close attention to the author. What I did not expect was that he was a graduate of the Aga Khan University Medical School, Class of 2009.

I reached out to him and recommended highlighting him as a featured AKU alumnus. Clearly, Haider is well accomplished as a young physician with 34 indexed publications in Medicine (remember he graduated in 2009). But what makes him truly unique is the fact that he has already published a first novel, “Auras of the Jinn”, and several articles for outlets such as the New York Times, the LA Times, the Atlantic, the Guardian and Foreign Policy.

He was very humble when I spoke to him. He told me of his love for writing as a young boy and how his parents encouraged him to pursue his calling. Married and applying for a Cardiology fellowship this coming year, he was kind enough to respond to some of my questions.

We are very pleased to highlight Haider as our featured alumnus and look forward to his continued success.

Very early on when I was ten, I drew a comic book about a crime fighting mayor in Karachi. Stuck by sentiment, I gave it away to one of my friend who was moving away. I followed that up with a few stories I wrote in a notebook about death on K2, anacondas, detectives and other fantastic ideas. My first publication was a poem, published in the Nation the day after India’s nuclear test in 1999. I followed that up with a series of articles for the News and Dawn. It was at Aga Khan University that I wrote my novel “Auras of the Jinn”, which was published by an Indian publishing house and distributed in both India and Pakistan. Aga Khan University really provided me with the environment, both intended and unintended, to become the person and writer I am today.

What type of writer do you think you are? Investigative, fictional, medical?

I started out as a pure fiction writer. It was when I started writing research papers that I became much more analytical. Writing fiction is much more forgiving than writing a paper. I appreciated the need of precision as I wrote manuscripts and having them shredded apart by reviewers. Over the years my writing has evolved and I have found a happy marriage between storytelling and analysis. Providing facts can inform readers but telling a story evokes a more primal response.

Which do you prefer?

I haven’t written fiction in years. I finished my novel in the summer of 2006 and have never really been struck by the bug since. Writing fiction is a consuming process; it never leaves you, and everything you do is colored by it. In many ways, it makes you vulnerable to your most primal senses: you see more, smell more, feel more, remember more. Being that open is burdensome and not always compatible with being a productive human being. Writing non-fictional observational pieces are far less taxing. However, I miss writing fiction and wait for the calling everyday.

As a resident, where do you get the time, the ideas?

During internship, I did little more than work, eat and sleep, and I barely wrote anything. But more than time, as an intern I had little idea about what was going on around me. As a resident however, not only have I had more time, I feel much more capable of understanding how medicine works, what patients feel, and what makes doctors tick. Every day I go to work, I am bombarded with ideas. The difficulty lies in picking out what is relevant, original and interesting.

What was your first major piece, where?

My first major piece was written in the aftermath of the Boston marathon. Having been very close to the events, caught in the stampede, I reported my experience that was published in the New York Times Op Ed the day after the tragic events. The piece received international attention. I was on call in the intensive care unit the next day. My pager, which was signed over to one of my co-residents, was beeping constantly with correspondents from CNN, BBC, NPR and PBS. It was a minor distraction as I tried to get through rounding on a long list of sick patients. But I was glad the article got the attention; it was the first time the experience of being a Muslim was published in a major American outlet and represented not only the experience of paranoia that I felt but resonated with anyone anywhere who had experienced discrimination of any sort.

How did you get involved with the New York Times, Atlantic Journal? Boston Globe?

My first major piece was a story I wrote for the New York Times. I wrote it during a few long dark winter nights while I was rotating in Dana Farber. At any given time my team would be taking care of a lot of chronically ill patients at the end of life. As one of the most prominent tertiary care cancer centers, patients came from far and away fuelled with hope of a good outcome in the face of a very poor prognosis. At the same time, I would read so many articles in the media about the enduring power of hope, but as a physician I saw hope leading many down a path of more procedures, more interventions, and more shattered dreams. The piece, titled ‘The Cancer of Optimism’ was accepted for publication in the Sunday Op Ed by the New York Times. This piece was accepted before the piece about the Boston Marathon bombings but published afterwards.

After that, and due to the additional time I had as a resident, I started to write extensively for publications I enjoyed reading. I published more pieces for the Times, as well as the LA Times, the Guardian and the Atlantic amongst others.

Anything else we should know about you? Your other interests?

Within medicine, I get my creative outlet in clinical research. Going to Aga Khan University was the only reason I could develop an acumen and interest in research. I was lucky to work with Anita Zaidi, and used the experience to maintain my connection with research to remain productive. My research and my writing are complimentary – both inform each other in unexpected ways. Research relies on clearly expressed ideas while good writing that informs readers benefits from the rigor of accuracy that forms the basis of research. Amongst many benefits, my research allowed me to match into a prestigious residency program. Providing strong research training during medical school and access to mentorship can help train medical students for successful careers in academic medicine. The alumni can have a major role in opening up access to research mentorship which can provide a pathway for medical students to succeed.

Profiles of other alumni highlighted on the website over the time can be viewed under the “Featured Alumni” category.

In order to nominate someone or self-nominate, email your nomination and information by email to .